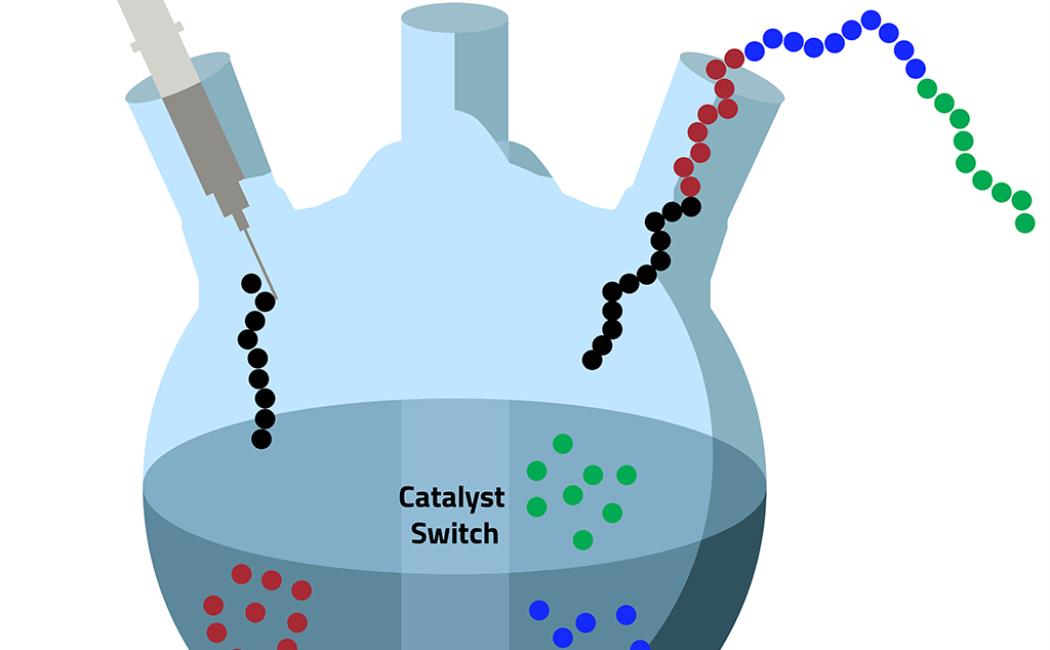 Catalyst switching means four become one:
Catalyst switch strategy is the key step in the production of a four-component crystalline tetrablock quarterpolymer. 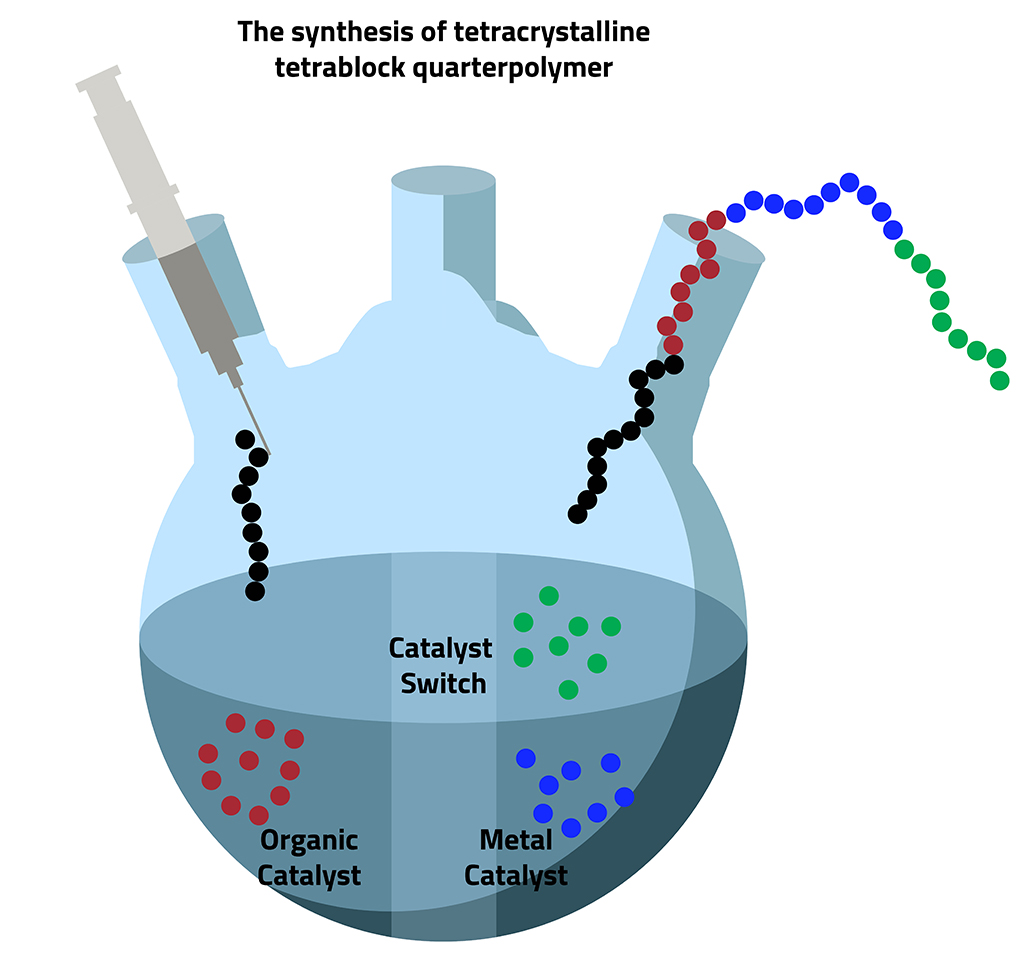 Using a technique called "catalyst switching," the KAUST team is able to create multiblock polymers in a single reaction pot.
The versatile new approach for creating these “multicrystalline multiblock polymers,” developed by Nikos Hadjichristidis from the KAUST Catalysis Center and his team, in collaboration with Yves Gnanou, could lead to a whole new family of advanced polymer materials.
Polymers are long chain molecules made by connecting together small molecule “monomeric units,” like a string of identical beads on a necklace. Recently, researchers have developed ways to make “double-crystalline” copolymers in which one part of the chain is made from one kind of monomer and the other part is made from another. “Double-crystalline block copolymers have myriad applications, such as for energy storage, tissue engineering and drug delivery,” says Viko Ladelta, a member of Hadjichristidis’s team.
Adding an even greater number of different polymer sections has the potential to produce materials with even more advanced properties. “But the synthetic procedures are very demanding,” Ladelta explains. “It was difficult to perform even the synthesis of double-crystalline block copolymers, due to the incompatibility of the monomers and catalysts.” Making materials that incorporate four different monomers in four chemically different blocks— tetra-crystalline tetrablock quarterpolymers—leads to even greater incompatibility.

Hadjichristidis and his team have developed a trick, called catalyst switching, to help overcome the incompatibility problem. Most organic catalysts that are used for a polymer-forming reaction, called ring-opening polymerization, are either acids or bases. By adding one type of monomer to the polymer chain under basic conditions, then adjusting the pH and using a second catalyst to add the next monomer, it is possible to create multiblock polymers in a single reaction pot. “This strategy saves time and also avoids the risk of any contamination of the polymer,” Ladelta says. 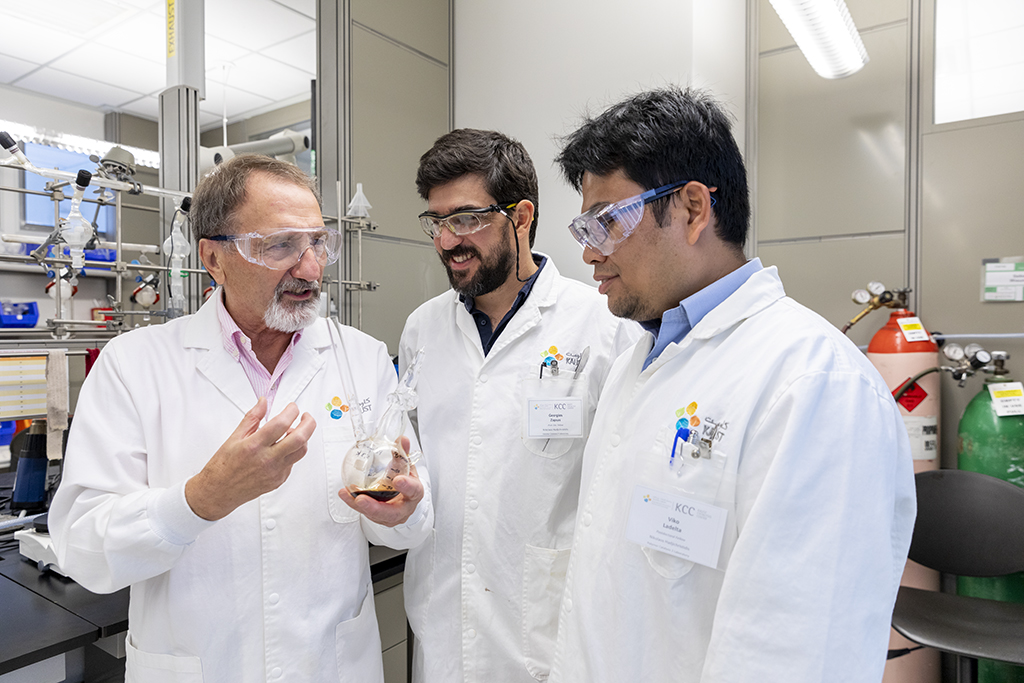 (l-r): Nikos Hadjichristidis, George Zapsas and Viko Ladelta discuss the mechanism of catalyst switching in their lab at KAUST.
Hadjichristidis’s group have previously used catalyst switching between organic catalysts to create double-crystalline and triple-crystalline polymers. Now, for the first time, the team has shown it is possible to adjust the pH, then switch from an organic to a metal catalyst, to make a tetracrystalline tetrablock quarterpolymer.

“Our plan is to expand the scope of the catalyst switch strategy to other types of polymerization,” Ladelta says. “We will synthesize more complex multicrystalline polymers and collaborate with polymer physicists to understand the physical properties to guide us toward real-world applications.”